Cosmetics used for lips, such as lipstick and lip gloss, contain metals in the pigment.Among them, "lead" causes poisoning, so food is regulated.But lead exists in nature.So for cosmetics, raw materials may contain lead.


According to a survey by a consumer group in the United States,an independent study found that lead was detected in a majority of lipsticks in the US cosmetics market.Japanese lipsticks are no exception.

In 2007, 685 cosmetics were found to contain lead, according to a survey by the US Food and Drug Administration (FDA). However, the amount of lead absorbed from the skin by licking the lips is very small and not enough to cause health damage. However, lead will accumulate as you continue to use it.

"Lead" deposits small particles of lead toxin on the lips, which can turn the lips blue or black over time. Your lips may appear dark because of accumulateed lead.

"Snow Lips" is a new concept lip lightening. The lead and other metals accumulated through the use of cosmetics are pulled out of the skin with a magnetic cartridge. Removing the metal and get your natural lips color back.

Use a machine developed by a doctor
Removal machine and lubricant that uses magnetic cartridges developed by French dermatologist so only minimam damage on your skin.


Minimum Pain
Magnetic cartridge is NOT needles and surfs on the skin and NON-INVASIVE.Moreover, it is not irradiated with strong heat and light.
Lip whitening (snow lip) 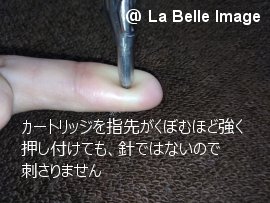 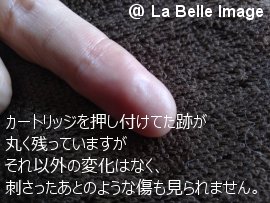 ✽There are individual differences in how you feel pain. Rubbing the skin with a metal cartridge may cause a slight pain.(Never push the cartridge hard like the image and movie above. Images and videos are made to show that cartridge is not needle and it is non-invasive. )
No Peeling,No Breaching
The lubricant developed by dermatologist.It is not strong acid or alkaline and not peel off your skin.
No Scar
The Lip Whitening at this salon does not use strong energy such as heat or light, so there is no worry about scarring.

Counseling
Fill in the medical record to confirm your physical condition.Please do not hesitate to ask me anything you do not understand.
Cleansing
Remove dirt and oil from area with cleansing lotion.
Treatment
Surf the cartridge with lubricant over the skin.Repeat wipe, moisturize,surf the cartridge.A maximum of 20 minutes of treatment can not be done longer than that.
Finishing
Clean the treated area with wet cotton.
After Care
Apply After Cream.

✽There are individual differences in how you feel pain. Rubbing the skin with a metal cartridge may cause a slight pain.
✽Redness may appear on the skin after treatment in case.Redness tends to occur in the case of treatment for thinner skin and dark remaining color.
✽The number of required removal sessions depends on the condition, so it is impossible to answer clearly.(On average, it returns to the original color after a few treatments. After that,take session every 6 month to one year to keep bright color.)
✽Melanin and spots that are originally on the lips cannot be removed.

✽Keep clean and do not touch directly with your hands and fingers
✽Apply after cream daily for about 1 week
✽No sauna and public baths
✽No swimming pool,sea and beach
✽No sunburn
✽No makeup on and around affected area
✽Avoid smoking and coffee
✽Consult your doctor if you have inflammation or infection or other concerns